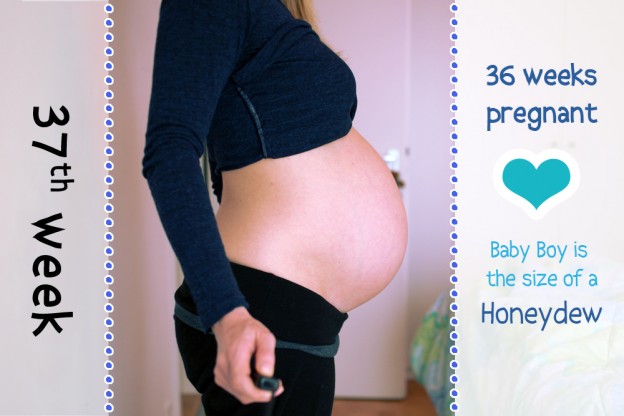 Belly button in or out: Hard question. Even and a bit out on the top, so, an Outie I’d say.
Sleep: Good, I’m so happy! I get up once and that’s it. It takes a while for me turning from one side to the other but that’s not worth mentioning.
Food (non) cravings: Nothing special, I try to eat less sweets those last weeks. I don’t buy any sweets when going shopping, my sweet snack in the evening is a fruit yogurt. I spent a day in the city this week and walked passed Starbucks and I mean really, as a high pregnant woman you can’t just walk passed a Starbucks knowing they have so good yummy sweet stuff, so I went in and got a blueberry muffin. Yummy! The last time I visited Starbucks was in Paris 1,5 years ago, so come on!
Symptoms: Not that many actually. I get bruised when I lay on one side too long, it feels like my skin/meat just falls asleep. Breathing is still a bit difficult. My butt starts hurting when I sit too long. It’s amazing, if I figure out my current BMI I’m still normal weight. Yet normal things like sitting or laying on one side start to hurt after a while, I’m out of breath faster than normal. When I do yoga my knee-bones make scary sounds. My lower back starts hurting again, mainly after I get up from the couch.
I don’t feel so good after I eat at night. I already eat less but I feel like a ton afterwards, it’s very uncomfortable. When I eat too late I get a heartburn at night which I’ve done twice this week. I should know better by now 🙁 Maybe I should just skip the evening dinner?
When I come home from the cold outside I get very red cheeks and ears and I just feel very hot for a long time. That’s new.
Can’t believe I’m carrying +12 kg around with me every day. Wow.
Labor Signs: None. I started a hayflower steam bath the first day of my 38th week. It’s not as relaxing as it sounds like, I took 1 liter of boiling water and added three tablespoons of hayflowers. Seeing the pot was too small to put into the toilet and sit on it, I put it on the floor and kneed over it and just let the steam go “into me” (TMI, I know). This method should loosen your pelvic muscles.
I also still do a perineum massage daily or every other day for five minutes and drink two to three cups of red raspberry leave tea daily.
Maternity clothes: Yes please! Panties a size bigger without a rubber band are the best thing ever!
Stretch marks: None
Miss anything: Getting up from the couch with ease
Looking forward to: My next OB appointment tomorrow. As I assume our Baby-Boy will be born in March I made a list of cool, easy to remember March birth dates (although I hope he arrives in the week from the 21st to 28th of March):

Let’s see if he decides to come on one of those.
Best happenings this week: On Monday I had my first prenatal acupuncture at the hospital where I’m planning on delivering our baby-boy.

You normally have four sessions. One each week until you hit 40 weeks. It’s the first acupuncture I’ve ever had.
Reasons I decide(d) to spend 20 EURO each session for something which isn’t scientific proven:

The first time I got three needles in each lower leg. One right by my ankle, two on the outside of my legs right under the knee. It takes 20 minutes. While I was there I’m pretty sure at least one woman was in labour. I heard her breathe the “aaaaaaaahhhh” with every contraction she had. Oh, and I also found a 10 EURO bill on the street! I never found so much money, I was all excited 😀 (although I was undecided at first if 10 EURO are worth bending all the way to the floor but yes, they were)
On Tuesday I had an appointment with an anesthetist who explained me everything about the epidural (PDA). I filled out a bunch of questions, so that’s one thing I don’t have to do when I’m in labour (I hope) and decide I want an epidural. I’m not planning on one but you never know. After the appointment I walked through the city a bit and treated myself to a blueberry muffin at Starbucks. Nom. I also bought some little stuff for our Baby-Boy’s room, like a heart-shaped picture frame and a little elephant magnetic-frame.
Other than that I had a pretty relaxing week, met with a friend and her daughter, met with my sister and her daughter, had a lovely dinner with my bubby, my parents and my sister and her family on Saturday eve with yummy Schnitzel and Dampfnudel 🙂
Movement: Still a lot and he still has the hiccups regularly. He pushes himself against my butt-hole a lot (or maybe those are his arms) and it feels like, well, I’ll keep the details to myself.
Gender: Baby-Boy Bruno
Happy or moody most of the time: Happy, relaxed, very excited. I have my off-days every now and again where I feel left alone and unable to cope and that people still expect everything from me, forgetting that, so close to birth, I might have other things on my mind, also if I don’t show. That’s always the problem of someone “strong”, people don’t think that there might be phases where you just can’t take things so easily, they will not ask you “how are you doing” or “what are your concerns” because they think that everything is always fine with you.
Sports: I started yoga for pregnant women. Wow, doing yoga with 10+ kg more on my ribs ain’t easy, just the regular things! Never thought so. The Sun Salutation – uff! It’s getting better/easier the more I do it though. I plan on doing yoga two times a week.


You nicely see the scar where I had my belly piercing over my belly button. And my crooked Linea nigra.